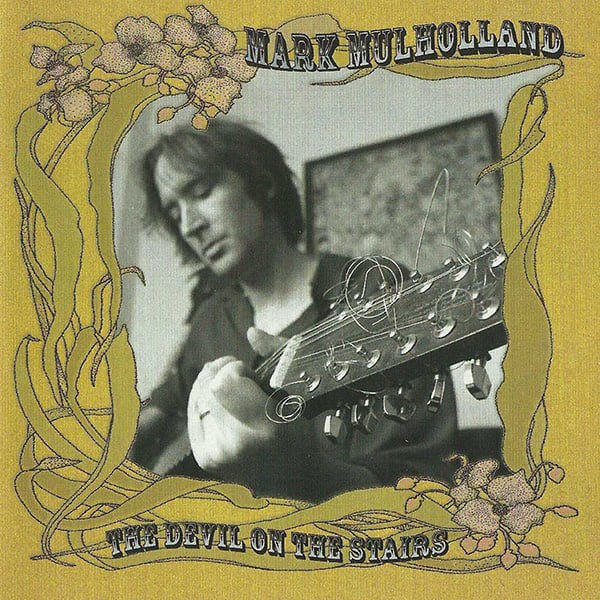 A fine collection of bittersweet songs. An inventive, melodic guitarist with a warm and expressive singing voice; flashes of Jansch, Perrett, and Dylan; conjuring long languid afternoons and melancholy drawn-out nights in distant cities. A delightful variety of styles which unfold gradually to reward the attentive listener.

Cannery Row Records is pleased to re-issue Scottish singer-songwriter Mark Mulholland’s first solo album, “The Devil on the Stairs”, a double album consisting of one volume of studio tracks and a second disc recorded live at a concert in 2005 in London’s legendary 12 Bar Club (which sadly since fell victim to “redevelopment”).

Born in Glasgow, from an early age Mark Mulholland was gripped by the twin passions of music and travel, and spent years moving around, with sojourns in various parts of Ireland, the south of France, Germany and Prague, busking and picking up gigs, forming bands, as well as swapping songs and jamming with musicians he met along the way. In 1996, on tour around Europe with his band Impure Thoughts, he stopped in Berlin for some gigs spread over a few weeks. The van died, the band put down roots in the city, and Mark ended up staying for 14 years, playing with Impure Thoughts and their acoustic alter ego, Two Dollar Bash, setting up a concert venue and a second hand bookshop, and starting a regular Sunday night songwriter’s open mic/jam session, which has continued, now run by a friend, for more than 20 years. Originally released by the UK label Troubadour, and produced by the Australian engineer Dugald Jayes, “The Devil on the Stairs” comes from this period, when Berlin was a melting pot of musicians and artists passing through (or not…), and the album features an impressive array of guests: Australian musicians Chris Hughes (drums, percussion), Chris Russell (organ) and Molly Knight (vocals), Mark’s bandmates from Two Dollar Bash, Tony Rose, Joe Armstrong and Matt de Harp, American harmonica player Keeley Brineman, Belgian keyboard player Nico Mansy and Mark’s sister Orla on violin.

The double album set showcases Mark’s songwriting, guitar playing and singing, covering a variety of styles including folk, blues and rock. As the American guitarist and singer Bill Hangley Jr., said, “When I play his songs, I find out quickly who among my listeners knows what it’s like to fall in love, or fall apart, or dream a drunken dream, or smile at a sunrise from the back of a truck. Those people are the ones who say, “Wow, what a great song.”