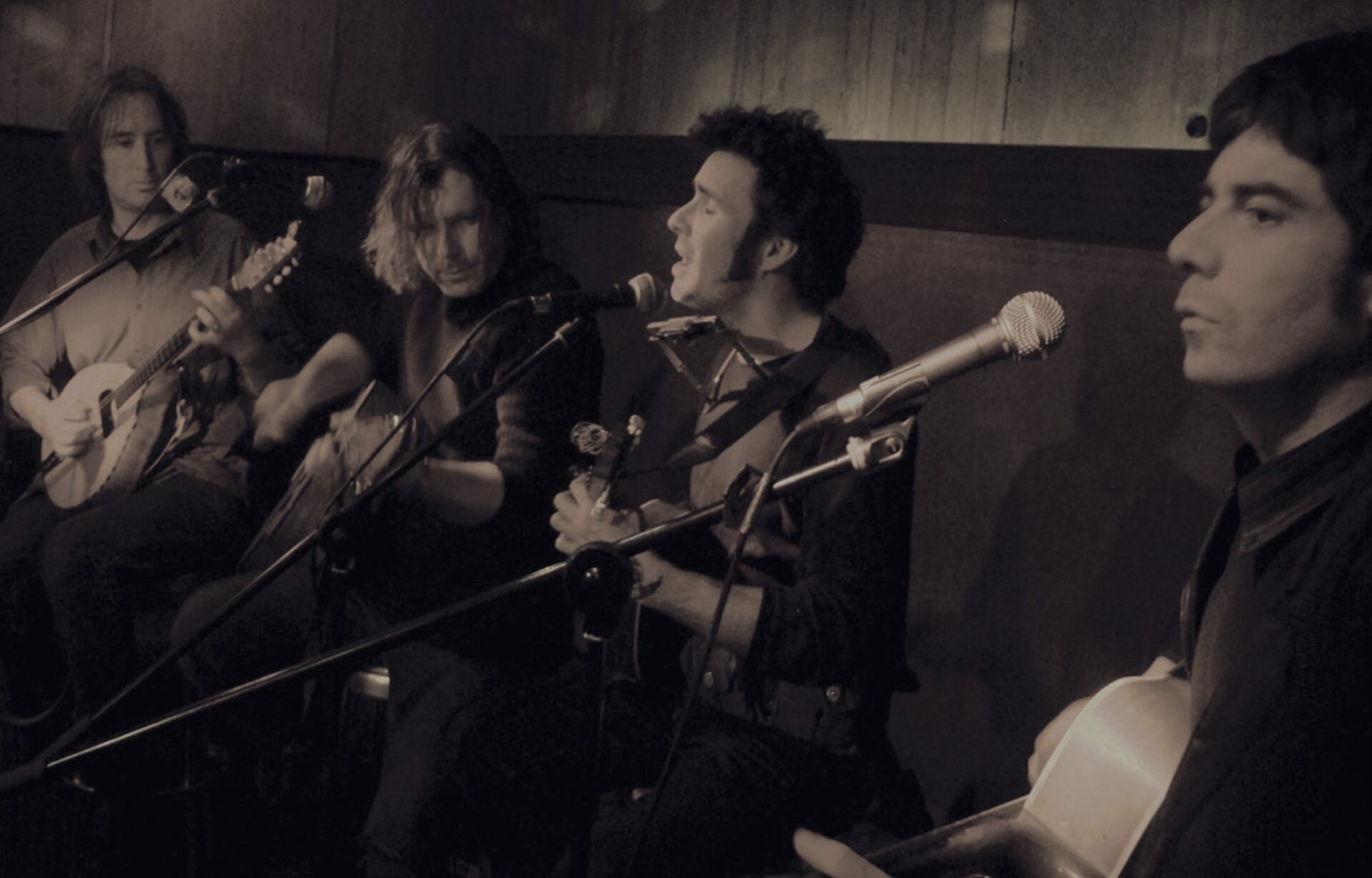 A common repertoire of original songs, shared over many years.

“Chansons nomades” is a large repertoire of original songs, written and performed by a group of outstanding musicians, post-punk troubadours now scattered in various countries, who play in Berlin, Prague, Dublin, Glasgow, New York, San Francisco and many other cities… Long-time friends, these artists have been criss-crossing the planet for three decades, distilling the different musical currents that have marked their international career between rock’n roll, folk, country, Cajun, chanson, jazz and blues. Their “Nomadic Songs” are mostly autobiographical, drawing on years of travel and musical experience, with all the exhilaration, excitement, frustration and sometimes despair that entails – all the ups and downs of a rock’n’roll lifestyle that is not merely imagined.

It all started in Prague in the early 90’s, with many musicians from all over Europe and the US being drawn to the magical atmosphere of the city in those hopeful years after the Velvet Revolution. Mark, Tony, Joe, Matt, Sean, Claude and many others, songwriters and performers, met as street musicians on the famous Charles Bridge. They played and exchanged songs. The guitars, mandolin, banjo, harmonica and percussion merged, the vocal harmonies flowed, and a group of friends was born, now united by a unique repertoire of “nomadic songs”. Since then, each of them has followed their own path, producing multiple albums with a wide variety of projects, performing throughout Europe and North America and further afield. They never stop playing, and their catalogue has grown over the years, enriched by their musical peregrinations. Their paths sometimes cross during a concert or a festival, and they find themselves in a duo, a trio or even a sextet… The magical interaction and intuitive connection never fails, bringing old songs and new to life with the same virtuosity and a renewed energy each time.

“The great strength of the band lies in the fact that each member writes his own songs and can sing lead, with the others providing backing vocals or harmonies. This makes the set more varied and intense. The interaction between the players is phenomenal, not to mention their masterful technical skills. (Concert review, Rootsville, Belgium).

For the Festival “Aux quatre coins du mot”, whose theme for the 2021 edition is “bourlinguer”, which means to wander or roam, this concept of “nomadic songs” from a tribe of musicians always on the move is very appropriate. Ports of Call Music and the association “L’Artisterie” are joining forces with the Cité du Mot to present an acoustic concert drawn from this repertoire, performed by several of its main protagonists: Mark Mulholland, Matt De Harp, Tony Rose, Joe Armstrong, Sean Condron and Claude Cahn, gathered for the occasion from all over the world: France, Berlin, Prague, Geneva and New York.

“A Great Place to Leave”, the third album from Berlin band Strip me Naked.  This album will be released this summer on Cannery Row Records/Ports of Call Music, as CD, vinyl and download. [...]

Scottish singer-songwriter Mark Mulholland will be releasing his third solo album, “Carousel”, in autumn 2021.  It was recorded in Bamako, Paris, Berlin and New York, and features collaborations with many of the [...]